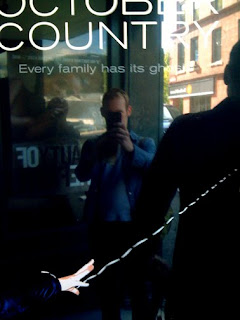 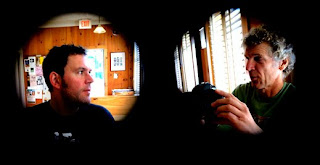 
It’s early October and the east coast screenings of the film have just ended I’m writing to you from a train heading upstate NY to spend time with the folks while Mike takes the film to Moscow and other screenings in Russia.

We began in Maine with the Camden International Film Festival. This festival has a sharp young energy, strong programming, and seriously engaged audiences (so engaged that our Q&A got a bit intense – an awesome, if prickly situation.) We are happy to spread the word that Jean–Pierre Duret’s “Because We Were Born” took one of the two top doc awards- This is a film that is rarely seen and, like many of the best documentaries we’ve encountered, deserves so much more attention. The Philosopher Kings took also took top prize and it’s our hope that our travels allow us to catch this film.

From Maine we drove through a white out downpour to meet my parents and Woodstock for their first public screening of the film. We were all emotional afterwards but my mom and dad displayed the same directness, clarity, and honesty that made them so special on screen. It was beyond me to read the emotions crossing my mothers’ face as she got a second round of applause but it was one finest moments of making and presenting this film to hear her, shaky voiced and scared, speak with pride for the film and for herself and our family. Soon after, my father was thanked for his Military services by a young veteran and I haven’t seen his seen his face light up like that for years. This night wound up with some high-jinx between Mike and AJ Schnack and some internet rumors about winning the Skype awards (which don't exist - yet. We are waiting...) The award for non fiction Pentecostal mind-blowing goes once again to AJ.

From Woodstock we drove down to NYC, entertained with sass and stories from Brian Brooks. On Mon night we had a wonderful screening at Thom Power’s Stranger Than Fiction series at IFC. We were taken aback at first to learn that Chris Rock’s premier e of Good Hair was taking place at the same time, and almost prevented from entering the lobby by the guardians of the red carpet. All went well though, with a great audience that included some long lost friends and some admired filmmakers. We can’t thank Tom enough for everything he’s done for us since we first started brings the film out of the editing room. Afterwards, in the flash bulb popping lobby we thanked Chris Rock for coming to the film and lending a red carpet. He said, “I’m happy to support you,” Awkward pause as two different worlds of filmmaking try with friendly intentions to touch and both parties feel they almost, but not quite, do. His hair was damn good though! The night ended happily with too much drinking and a big full moon over NYC.

Now I’m an hour from Utica, leaves blowing past the train window, and Mike somewhere in Moscow. We’ll come together again in SF, the second homecoming for the film, then off to Europe with thanks to all and everyone who’s helped us and viewed the film so far.
Posted by donal Mosher at 3:29 PM